History of the ABAD Project 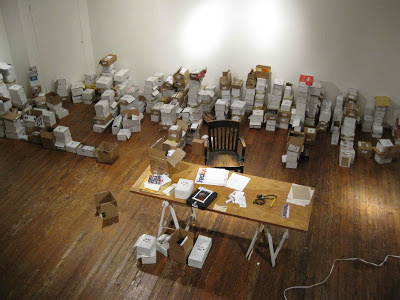 A BRIEF HISTORY OF THE ABAD PROJECT


“A Book About Death,” (ABAD) is an on-going, unbound, unpaginated book produced by artists worldwide. It was inspired by American artist Ray Johnson (1927–1995) and initiated by Matthew Rose as an international collective art project in September 2009.

A Book about Death began with Ray Johnson, an American artist living on Long Island known primarily as a collagist and correspondence artist. He was a seminal figure in the history of Neo-Dada and early Pop art and was described as "New York's most famous unknown artist."

Conceptual artist and inventor of “Correspondence Art,” Ray Johnson mailed his original unbound book to friends and to his New York Correspondence School “students” in the 1960’s. The pages, in his idiosyncratic style, were funny, sad and ironic one page visual meditations on death and life.

In January 1995, Ray Johnson jumped from the Sag Harbor Bridge into the icy waters below and drowned — an apparent suicide. For an artist who spent his life communicating seemingly non-stop, his death left a mysterious and silent wake.

New York artist and writer Mark Bloch, a friend of Ray Johnson's, wrote:
First and foremost, the American artist Ray Johnson (1927-1995) the founder of the New York Correspondence School deserves all the credit for creating the concept of A Book About Death because he was really onto something when he came up with the concept in 1963.

Between March of that year and February 1965, he sent out 13 pages or so of something he called A Book About Death. In framing one piece of a paper as one page of a conceptual book, he anticipated many literary developments of the four decades that have followed.

The A Book About Death Project was launched as an underground, global art project in September 2009 at the Emily Harvey Foundation Gallery in New York City. It was conceived and curated by American artist Matthew Rose as an open, unbound book on the subject of death.

Taking the name A Book About Death from Ray Johnson, Rose paid homage to the founder of mail art and at the same time offered international artists the opportunity to explore the theme of death through postcard sized works in editions of 500; thus creating a “book.” Nearly five hundred artists submitted five hundred copies of their artwork to the exhibition.

On the opening night,  visitors to the exhibition were encouraged to collect the free artwork and create their own unbound book about death. Many attending artists went on to exhibit their collections at other galleries around the world. The project grew into an international phenomena with artists curating their own exhibitions and calling for new artworks to be created for each new show.


ABAD has grown into an international art movement that continues to travel across the world. To date, ABAD has spawned more than two dozen collaborative exhibitions on four continents, captivating visitors in Australia, Brazil, Belgium, the UK, Croatia, Italy, Bosnia and Herzegovina, and Mexico.

The complete set of 486 cards is now in the Permanent Collections of the MoMA, NY, the Los Angeles County Museum of Art, CA, the Willo North Gallery, AZ, and the B. Davis Schwartz Memorial Library at C. W. Post/LIU, Brookville, NY. It includes work from artists as well known as Yoko Ono and as obscure as Dame Mailarta. The cards, of every design imaginable, approached this universal subject from every point of view–personal, metaphysical, conceptual and abstract.

A BOOK ABOUT DEATH EXHIBITIONS TO DATE