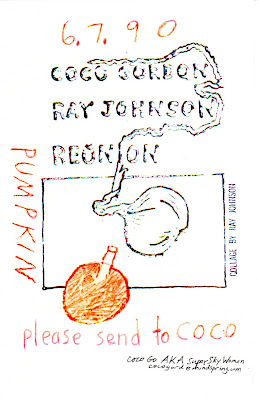 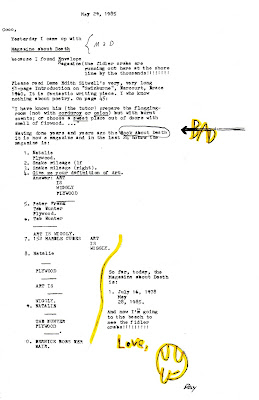 From Coco Go (an original member of Ray Johnson's Correspondance School):
"My entry starts on the written side of the card which mentions the onion
(…"not with corduroy or onion…”)
So on the flip side is our REONION a permutation of our original 1981 REUNION,
that after the reunion
Became the Reonion, then became the Rayon when the contents he [Ray Johnson] gave me
in 6 large cartons of mail art,
I placed onto shelves to try on, & we did several ties with different visitors.
(Rayon means Shelves in French) - Then he changed the name to the RAGON,
which as a gay person I took to mean Rag On after which he kept on sending me clues
I didn’t  understand until his death.
He had called me & even left messages on my answering machine
over & over & sent me  strange letters with Gaugin walking on water, we sent back 'n forth from 1990 on
Asking me, me did I “Get It?”  & I always said no,

So I found letters he had sent me for my entry this time around."